What are we doing at the dog rescue?

I have been going in several directions in the last couple weeks. We have been working on the cemetary cutting and triming trees, cutting grass and clearing areas for the plots. We had a small service for Ranger's passing. We are working on the fencing which will be finished next week (we're waiting on the wire to come in). The next phase is to complete the kennels for the orphaned deer. They will have an inside area that has heat & a/c, so they will have a super cozy place to sleep. And they'll have an outside fenced area to run and play in until they are big enough to release back into the woods. The next phase is the dog training hall: the upstairs will have to be painted and then we will be ready to start training dogs. I'm working on one dog run at a time until that run is complete, then I move on to the next one. The most important projects, like the dog training facility, will be completed first, before we move to the next project. We will be working towards creating the areas of primitive camping, and the RV park will have 10 full-hook-up spaces which will accomodate some large motor-coach type RV's in addition to smaller RV's or Pop-up Campers. We will have several primative camping sites in different places on the hills and mountains (we have several hills and are nestled in the southwest portion of the foothills of the Appalachian Mountains). They will be beautiful when we finish them. Something else we are working towards is kid stuff: a farm area with chickens, turkeys, goats, and maybe some ponies to ride. Plus other animals you can pet and feed if you like.
Posted by Joe Jackson's Dog World Inc. at 12:34 PM 1 comment: 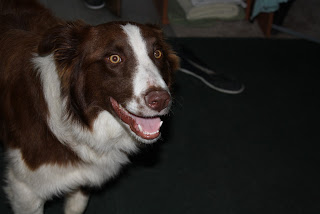 This is Jax. He was left out in a pasture by his owner who told me that Jax was no good because he got kicked by a cow...  I didn't really believe him.  Jax is very shy and really has no direction. Being a Border Collie he is lost without having a "job" to do.  Jax has made a big improvement since that day.  He carries his tail proud and is eager to learn new things. He is the first one I want to start training as soon as the 20 acres has all the fencing done. The training area will also be the first of the project to finish so we can start training him soon as possible.  I had these plans for Ranger, but we lost him.  It seems like Jax can sense that he wants this to happen.  We will be posting Jax's training from time to time to let you know his progress!
Posted by Joe Jackson's Dog World Inc. at 11:12 AM No comments:

Ranger lost but not forgotten! 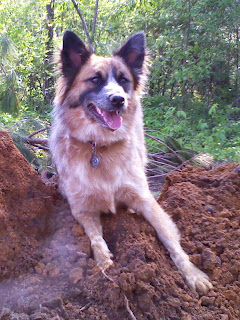 Today i lost a very special dog friend.His name was Ranger,we adopted him 6 months ago and it's been a great time having him as a friend to play with and fetch balls,that was his favorite thing to do.We had a lot of good times going places and seeing things he never saw before.i will miss him dearly and will never forget him.There are certain dogs in my life that seem to tug on my heart and he was one of those dogs.He loved to swim in the lake and retreive the tennis balls, he could go for hours knowing that he was doing it to please me.He will be missed dearly ,RIP in special friend ,I love you Ranger :)
Posted by Joe Jackson's Dog World Inc. at 6:55 PM 1 comment:

Dog World and the Twlight Zone......some days i get them mixed up.

Today has been a very fun day at Dog World, we walked out this morning and there are 2 little pups running down the road towards the rescue.  Starved skiny little babies.  They are covered in fleas too! We also took in a husky/shepherd mix named Eudora.  She's a cutie for sure.   And the last dog we got today is a Yorkshire Terrier named Abby.
Posted by Joe Jackson's Dog World Inc. at 9:20 PM No comments:

The world for that one animal.

I was notified that last year I spoke these words on this day (9-8-10), and this is what i said........."The kindness one does for an animal may not change the world...but it will change the world for that one animal." So a year has passed and I know I made a difference for many dogs lives.  It seems to be a natural thing for me to do. What about your rescues?  Tell me about your past year, I would love to hear your stories.
Posted by Joe Jackson's Dog World Inc. at 9:37 PM No comments: 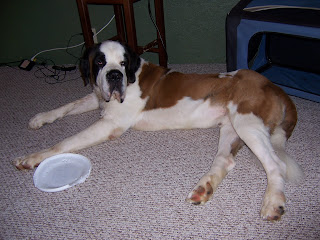 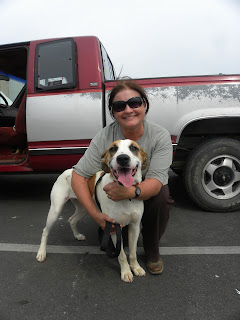 I found Lizzy and her two sisters a few months ago.  They are beautiful Fox Hounds.  If you google the Fox Hound, there are several with the same markings as Lizzy, including the dark coloring around the eyes. These dogs had been abandoned and left to starve. Maggie and Lizzy look a lot alike, but Maggie is an escape artist.  She can climb fences and unlock gates!  A nice family in the area wanted Maggie, but chose Lizzy instead because of Maggie's fence jumping.  Lizzy's new mom bought her an extra large crate, a new leash, and a big soft bed before they left.  We have a very good feeling about Lizzy's future.
Posted by Joe Jackson's Dog World Inc. at 3:53 PM 1 comment:

Your financial support is greatly appreciated! Donations are tax-deductible.

Once you click the DONATE button, you can pay with a credit card by clicking the area in the lower left corner of the screen where all the credit cards are listed. You do not have to have a paypal account. Thank you!!

HELP US THROUGH SMILE.AMAZON.COM

https://smile.amazon.com/ref=nav_logo If you order from Amazon.com, you can help our Sanctuary by placing your order through SMILE.AMAZON.COM instead. They will donate 5% of your order to our Sanctuary. (Note: You have to be on the Smile.Amazon.Com site before you place your order. If you have items in your cart through the regular Amazon.com site, you can open Smile.Amazon.Com and log-in with your same password and the items in your cart will be there for us to receive 5% of your order!) They also have a Smile.Amazon.com ASSISTANT that you can download and it will remind you to change over to the SMILE site. THANK YOU, and Happy Shopping (for the dogs). https://smile.amazon.com/ch/90-0767175

Promote Your Page Too